We moved to another hostel cause there weren’t any more available rooms in the current one. We weren’t picky at all so we just took the first budget option we found on the internet. 5 bucks per head – I think that says enough.

The window looks into the storage room, water smells like rust, there are wires sticking out of the wall, the toilet can’t be flushed, and at 1 AM there was a power cut that lasted for a few hours (so did our fan stop working). It was so tragic that started to be funny.

Butna, the driver, recommended me to try the traditional Cambodian meal – Fish Amok served in a fresh coconut. It’s kind of a fish soup with vegetables, but with a strong coconut flavor. It wouldn`t be an exaggeration if I say that that’s the only meal I could never eat the whole plate. After a few bites, I tried to take out the fish parts, but the flavors were already pretty married. Fish + coconut, hmm, I really wouldn’t recommend.

In the evening we went to try fish foot massage. 15 minutes foot massage + cold beer in a can costed us exactly 1 USD. And no, it’s not a typo. We’ve got some huge fishes which acted pretty violently. I didn’t like their attitude so I left them foodless and drank my beer. But Ceda enjoyed it. He likes rough.

Fish Foot Massage Siem ReapWe stopped at some 2-dollars-cocktail-bar to drink a few Long Islands, but the lady that works there seemed not very familiar with cocktails. Ceda, a former bartender, then got inside the bar and showed her how to do it which made not just her super excited, but also everyone around the bar.

Is there any dish you’ve tried you would never recommend? Why don’t you share it in the comments?

The traffic in Siem Reap is unbearable. There are no traffic lanes, traffic lights, not even zebra crossings. Everybody’s driving the motorbikes, scooters and tuk-tuks. That includes even a ten year old kids. It turns out that one motorbike can carry up to five people or at least three people and a trailer.

Siem Reap trafficI fell in love with a street market, but I don’t have much space left in my tiny backpack to buy everything. Still, when I touch anything from the stall, I hear the same thing ‘Lady, lady, I have so many colo’. Three dolla’, Three dolla’ ”

But mostly you get it for two dollars. Or even one.

We stumbled across some Buddhist temple and had a chance to speak with a monk. It seems like a pretty fair religion.

There were some kids in front of the temple, making a giant puppet for the parade, which is a part of The Giant Puppet Project. Huge puppet, dragon look-alike, was made out of a cane and bamboo. Too bad we won’t be here for the parade.

The Giant Puppet ProjectWe consumed all kinds of street food: roti pancakes, mango and dragon fruit juice, even a coconut water straight from the coconut.

For the dinner we’ve tried real Cambodian BBQ, at least they say so, but I’m not sure it’s really a traditional meal. Just this time instead of regular beef/pork/lamb BBQ we had a crocodile/snake/frog – all prepared in one burning pot, right in front of us. They call it Phnom Pleung, which is literally translated as “Fire Mountain”.

It turned out the meat is not that special as it sounds. In fact Ceda was pretty convinced they gave us some chewy chicken. And me, let’s just say I preferred the frog.

After-dinner-massage was a real bargain. Half an hour foot massage for 2 dollars and you get an amateur lady boy show included, where even those on the stage are laughing at themselves. What else can one want?

The kids are smiling at us, and they’re all incredibly cute.

Siem Reap Lady Boy ShowHave you ever tried any strange animal? Why don’t you share the story in the comments?

After Khaosan Road it was a time for some Chaos-On-Road cause of the unbearable traffic in Bangkok. Protesters have set up permanent barricades and therefore blocked the main city roads in an attempt to shut down the city and force the resignation of the prime minister.

On the main city’s road, Ratchadamnoen Avenue, is a complete chaos. A few vans were smashed and turned upside down. Google said that there was a conflict between protesters and police, but it should be over today.

Which is kind of perfect opportunity for the taxi drivers to raise the price, and charge four times more than what’s regular price. If there’s one thing I hate the most about the travel is a tourist rip off.

We asked dozens of drivers to turn on the taximeter, but every one of them refused to do that, so do we refused to take a taxi ride. The same story with tuk-tuk drivers.

The problem is that somebody is willing to pay that price – mostly tourist from the wealthy countries who are used to pay much more for the taxi ride back home. Drivers, lazy as they are, are rather waiting for that one expensive ride and therefore, either you pay the European price or you take a bus.

We took the bus instead – and that’s the real adventure. It took us exactly 2 hours from one part of the city center to another. If we didn’t use a navigation app we would still be driving in that bus cause we wouldn’t know where to get off.

But it was all so worth it, cause we went in one of the most famous Bangkok jazz pubs – Saxophone pub. I couldn’t tell what impressed me more – the atmosphere, interior or the live music. Each of the bend’s musicians was a bit extravagant in its own way.

The singer is obviously trapped in man’s body, but when it comes to singing – he’s rocking it! 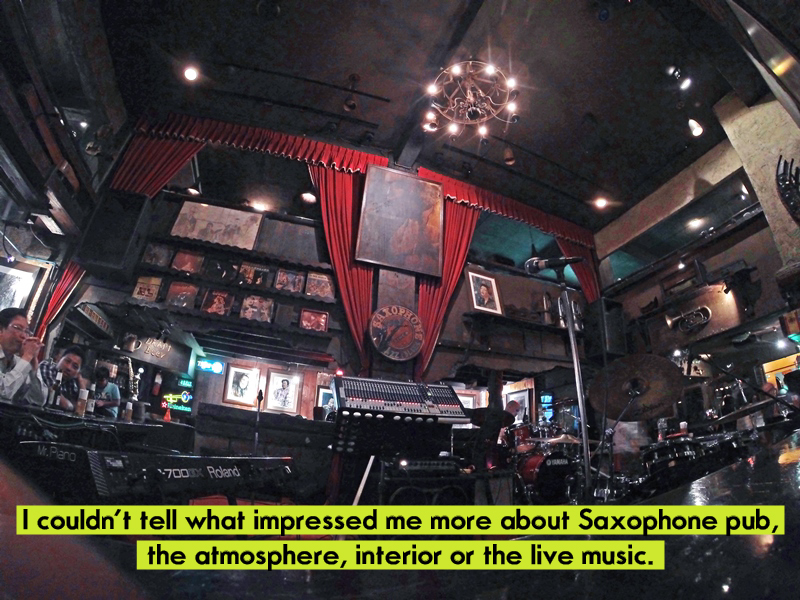 The saddest moment of all the SE Asia trip is when we found out gambling is illegal in Thailand. We even learned to play Craps only for this occasion.

The thing is, I only gamble when I travel, and I was really happy that we’re going to Thailand cause it seemed like a perfect spot for some long poker nights. I didn’t even think it might be illegal, cause if there’s prostitution and stuff I never thought gambling would be banned.

Which means gambling will wait until our next trip.